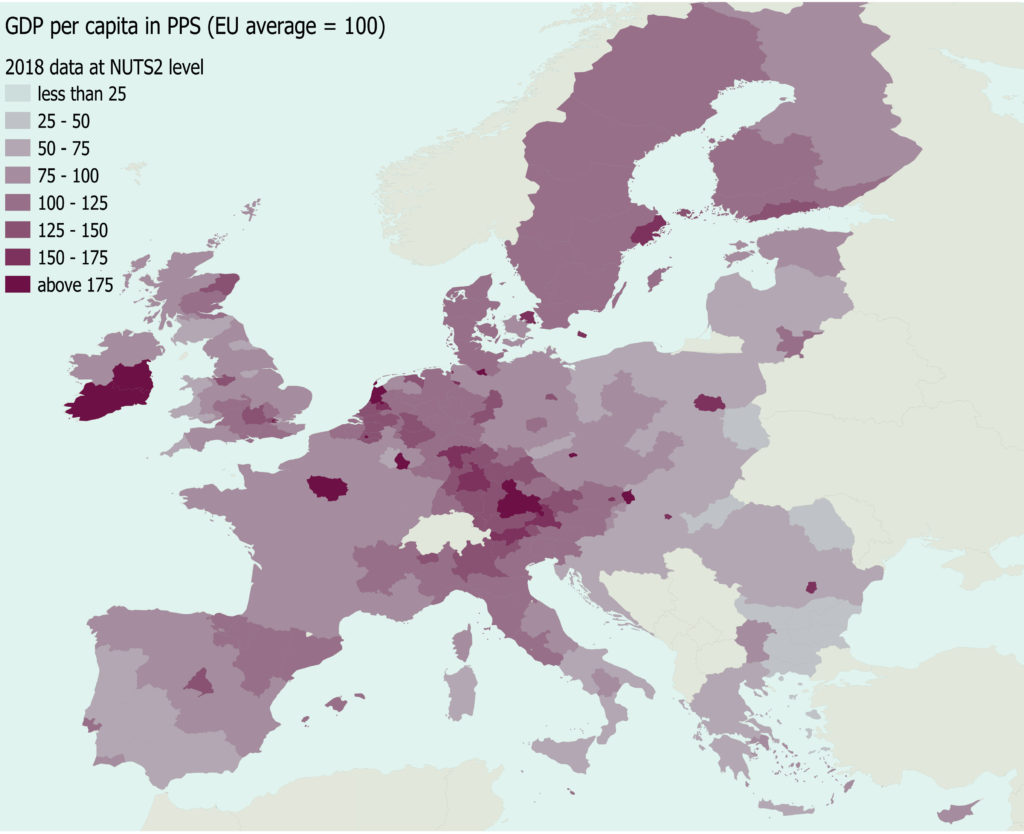 Over the last sixty plus years, the European Union (EU) has expanded its reach by admitting more countries. With the enlargements from 2004 onwards, the EU added 13 new countries, mainly from Eastern Europe, with low average incomes.

After their entry however, these new members have grown much faster than many of the existing member countries. If we consider the GDP per capita in purchasing power standard (PPS), Romania and Lithuania grew four times faster than Germany and France from 2004 to 2018, and Poland almost five times faster than Italy.

This convergence at national level is hiding subnational differences, especially in larger countries, differences that the European single market – thanks to freer movements of goods, services, capital and people – has exacerbated.

With market integration, agglomeration effects prevailed over dispersion effects. Businesses prefer, all else being equal, to locate in big markets in order to service and benefit from the presence of suppliers and knowledge spillovers. The presence of more firms then attract more workers in the area and local spending makes the market bigger and more attractive. This implies that certain regions have suffered from market integration.

The map shows the GDP per capita in PPS at regional level (NUTS2, according to the European classification of territorial units) relative to the average of all EU-28 regions. The evidence is twofold:

1) The core of the continent is richer than the periphery.
2) Urban regions are richer than rural regions.

The ten richest regions are Inner London – West (UK), Luxembourg, Southern (IE), Eastern and Midland (IE), Brussels region (BE), Hamburg (DE), Prague (CZ), Upper Bavaria (DE), Île de France (FR) and Bratislava region (SK). The GDP per capita in PPS in Inner London–West, is 6.4 times the EU average and almost 10 times the one in Southern Scotland, the poorest region in the UK. While in Germany, Hamburg is ‘only’ 2.4 richer than Mecklenburg-Vorpommern.

During the last decade, the divide between rich and poor regions has widened and the economic gap has turned into a political one: those who are not benefiting from market integration (globalisation and/or Europisation) revolt against it. When the revolt finds its expression in the ballot box, a vote like the one in the Brexit referendum is a probable outcome.

The regional divergence explains why almost three quarters of the EU budget is focused on agricultural subsidies and regional aid programmes and why it will be politically impracticable to cut this expenditure in the EU next budgets (starting from 2021), the ones without a net contributor named United Kingdom.