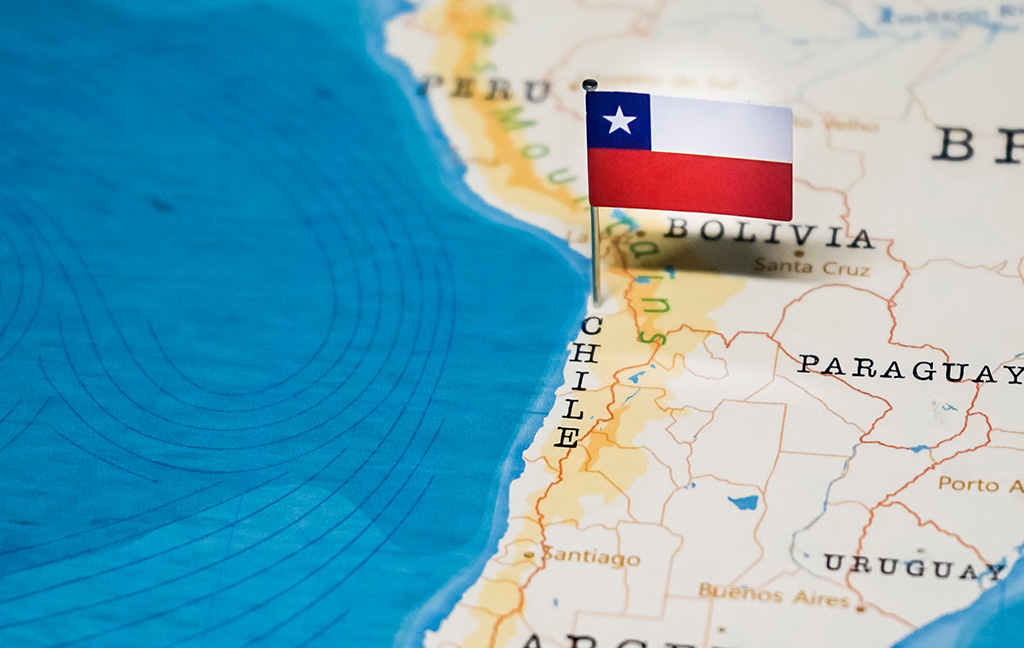 From the Cradle to the Grave

My December 2019 column ‘Neoliberal denouement in Chile’ concerned widespread civil unrest in one of Latin America’s richest, yet most unequal, societies after millions took to the streets demanding fundamental changes in Chilean society.

The violent protests were in opposition to the constitutionally-enshrined neoliberal economics which have made Chile the most unequal society in the OECD.

Protestors were ultimately successful in achieving increased social spending and a national plebiscite in 2020 to gauge support for a new constitution to ban the privatisation of state assets.

The current constitution was enacted under the aegis of Augusto Pinochet, the fascist army general who, with the active support of the United States, overthrew the democratically-elected Marxist president Salvador Allende in 1973.

US economists hired by Pinochet (all advocates of Laissez-faire and so-called ‘market’ & ‘trickledown’ economics), developed a comprehensive neoliberal blueprint to erase all traces of Allende’s Marxism with market-orientated policies.

Known as El Ladrillo (“the brick”, due to its size) the blueprint was followed to the letter by the dictatorship which slashed the public sector and state-controlled companies, emasculated the unions and made big cuts to infrastructure, housing, education, health and social security spending; most state assets were privatised and the cherry on top was big tax cuts for the wealthy.

On the face of it 50 years later, neoliberalism has enabled Chile to become second only to Uruguay as the wealthiest nation in Latin America (Chile GDP per capita US$ 13,321, Uruguay US$15,438 – World Bank 2020).

As with most statistics, the devil is in the detail, as the World Bank’s figures are based on averages which do not take into account that in Chile, elites (around 10%) earn an average minimum of US$10,000 – $30,000 a month while the majority of workers earn between US$145 and $540 a month.

According to the United Nations, at the time of 2019’s protests, one per cent of Chile’s population owned 33% of the nation’s wealth (now estimated in early 2022 to own 41% of the wealth due to Covid-related quantative easing which has pushed-up asset values worldwide).

Neoliberalism’s critics say it makes the rich, richer and the poor, poorer for which, using Chile’s free market experience as an example, there is ample proof (as is the growing inequality in all the neoliberal economies of the Western world). 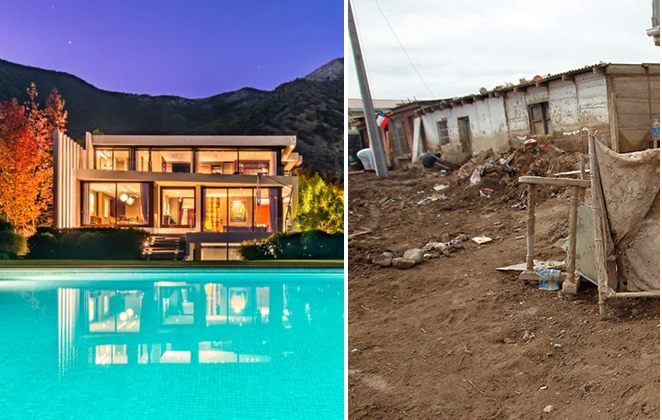 Inevitably, after the return of democracy to Chile in the 1990s, opposition to neoliberal shibboleths (such as the privatisation of education, energy, pension funds and water) grew as inequality increased, ultimately reaching a tipping point in 2019 (i.e. the mass protests of that year).

Now, two years on from those protests, change is afoot in Chile.

After 78% of voters in the 2020 national plebiscite voted for a new Constitution and an election for members of a Constitutional Convention was held in May 2021, the replacement for Pinochet’s constitution is almost finalised.

In a further sign of change afoot, Gabriel Boric, a 35 year old leftist and protest leader, has been elected Chile’s youngest-ever president. 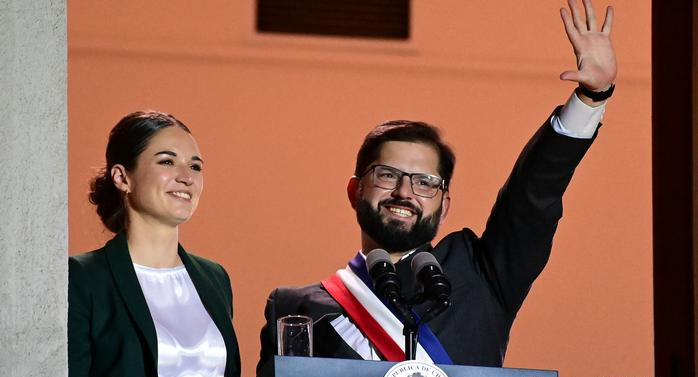 Gabriel Boric with partner and new First Lady, Irina Karamanos, an anthropologist and political scientist who leads the Feminist Front, a member of Boric’s ruling coalition.

In last December’s election run-off Boric prevailed 56% to 44% over ultra-right populist and fanatic neoliberal, Jose Antonio Kast (the multimillionaire son of a WWII Nazi fugitive and nephew of a Pinochet henchman who served the dictatorship as Labour Minister and Central Bank head).

Promising to make Chile “a dignified and just country” and a “welfare state” Boric has foreshadowed a progressive social, ecological and feminist agenda for his administration (his new cabinet has 14 women and 10 men with an average age of 42).

On the campaign trail, Boric said that “If Chile was the cradle of neoliberalism in Latin America, it will also be its grave” as he sees Chile’s poverty and inequality as the unacceptable underbelly of neoliberalism.

Boric leads a coalition (the ‘Broad Front’) which aims to transform Chile into a social democracy. 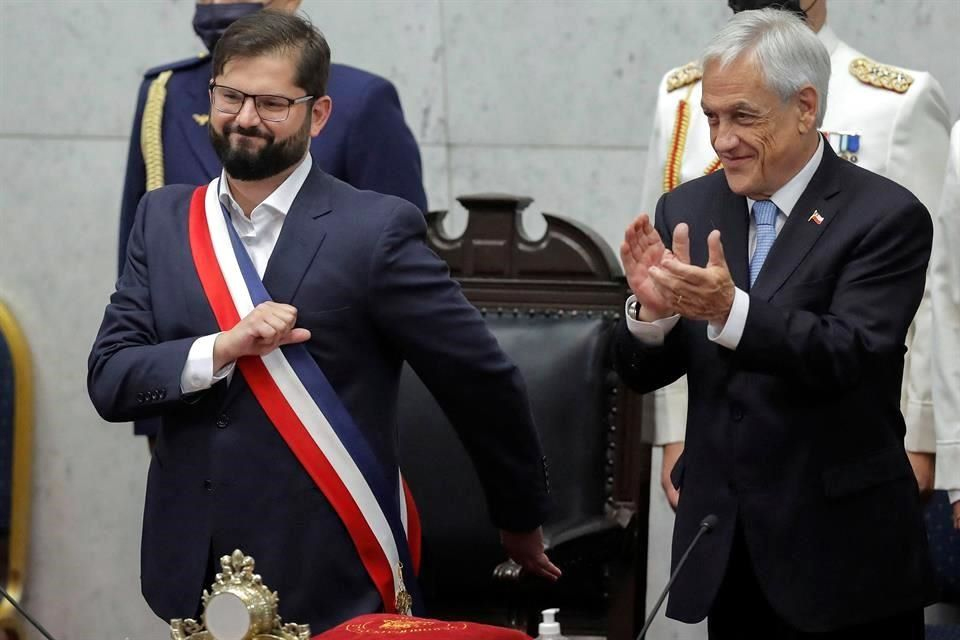 Social democracy is a philosophy that supports economic and social interventions to promote social justice within the framework of a democratic and a capitalist-oriented mixed economy.

Regulation of the economy in the general interest and social-welfare provisions are key elements of social democracy as a means to curb inequality and eradicate poverty, as well as support universally accessible public services such as care for the elderly, childcare, education, health care and workers’ compensation.

The best examples of social democracies are the Scandinavian nations who have achieved both economic success and eliminated poverty with their combination of free-market and socialist principles.

Boric has also pledged to tackle issues of immigration, indigenous rights and climate change but there’s no denying major economic and social change will be challenging as Chile’s Congress is just about equally split between left and right-wing parties with the balance of power held by independents.

While a restructuring of water, health, energy and transportation privatisations and the introduction of a 40 hour working week are well-signalled the transformation of Chile into a social democracy will be a gradual process as a result of political realities and the need not to spook foreign investors and trading partners.

Boric told a meeting of businessmen while president-elect “My commitment to gradualism and fiscal responsibility was not just something from campaign speeches, but rather a deep conviction that I have to make the transformations that are necessary. I have been learning that all change, all transformation, must be based on how things were done in the past”.

Also calming fears that Boric is going to upset the economic applecart has been his appointment of the former Central Bank head Mario Marcel as Minister of Finance whom the markets trust as a safe pair of hands.

On the trade and investment fronts Chile is one of NZ’s largest export markets in Latin America and if anything, Chile’s transformation to a social democratic development model will strengthen bi-lateral trade as the nascent middle classes grow as well as also strengthen already strong people-to-people and political ties.

From a NZ perspective Boric’s social democratic model must seem laudable, indeed, as citizens of a welfare state, NZ shares a common cause with Boric’s plans to address inequality and provide support for the least fortunate.

While the advent of neoliberalism (known in NZ as Rogernomics) has seen the privatisation of state assets and social welfare benefit reductions, NZ has still managed to keep a safety net in place for its most disadvantaged citizens and Boric’s ambitions to do the same in Chile deserves support.