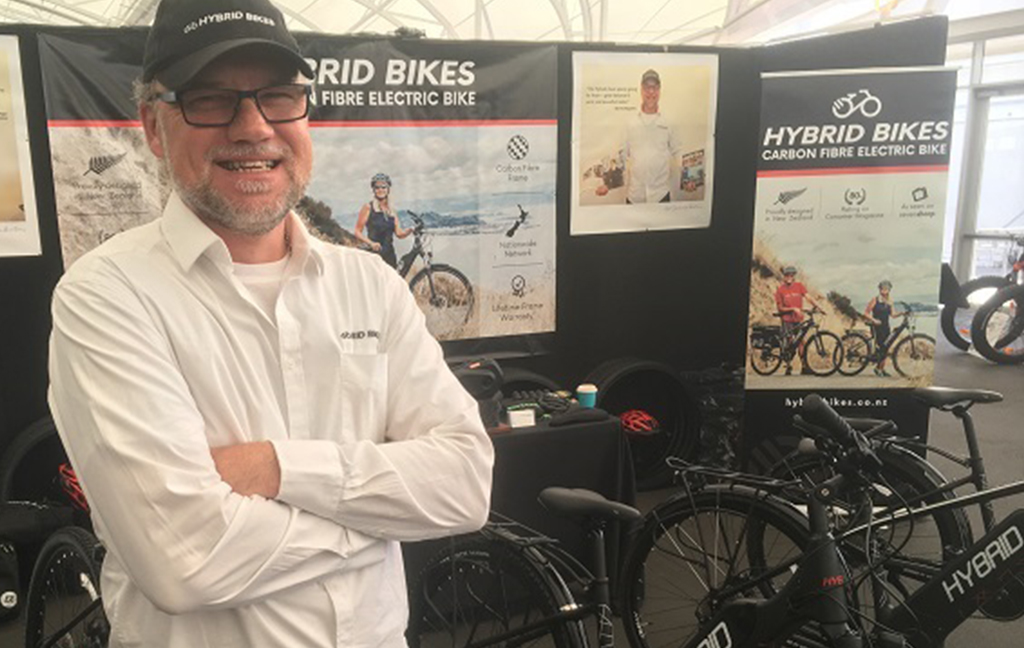 In 2016, Nelson-based serial entrepreneur Frank Witowski refused to let a cancer diagnosis stop him and after taking a year off to recover, he began his third start-up, Hybrid Bikes.

Frank settled in Nelson 23 years ago and lived at the top of a steep hill. During his cancer treatment he was not feeling particularly well and thought he ought to get himself an electric bike to navigate the climb.

“I couldn’t find anything suitable, especially not in carbon fibre, so the solution was I do it myself and so the journey started.”

Frank made it his goal to undercut the big players in the carbon fibre niche like Giant and Merida.

“We made it possible to sell our carbon fibre e-bike cruisers, commuters and hardtail mountain bikes for $5150 to $5350.

“Normal carbon fibre e-bikes start at $9000 to $26,000, so we achieved something amazing. Only a handful of companies around the world do what we are doing, that is how unique the niche is.”

Since ‘playing around’ with the idea in April 2017 and launching in August 2018, Hybrid Bikes now works with about 30 retailers and is eyeing export markets in 2021.

A highlight for Frank since the launch was when Consumer Magazine reviewed his hybrid e-bikes as second and third best in New Zealand.

“It was absolutely amazing that a Nelson one-man-band got better reviews than Giant and Merida for example, which are global billion-dollar companies.”

He says being the only carbon-positive certified bike company in New Zealand is also something he is proud of.

Learning as he goes

The most challenging aspect of starting the business for Frank was entering an industry which he knew nothing about.

“I don’t know the cycling market, so it was a big gamble to design a bike when you’re not a cyclist.  I did countless hours of research and spoke to lots of bike shops to understand what works and what doesn’t.

“All this research work paid off and made this carbon fibre e-bike venture a success. For me it was important to do something different, so I had a niche in an otherwise crowed e-bike market. Carbon fibre was just that niche market opportunity.”

Frank says early 2020 was ‘very uncertain’. The business took the Government’s wage subsidy and received marketing support from a regional business trust to get the business back on its feet.

But when the country moved to Alert Level 4, the cycling demand boomed, reinvigorating the businesses’ momentum.

“COVID-19 has changed the cycling world for a long time to come. It went from ‘what do I do with all my stock now if nobody buys e-bikes anymore’, to ‘I can’t get enough e-bikes now’, crazy times. We would have grown I guess 30% in sales [in the past year],” he says.

Good money management and being frugal meant the business could weather the COVID storm and Frank received huge support from Nelson locals who stepped up and supported their local businesses.

“Kiwis can see how hard you work to establish a company which perhaps has the potential to go global like so many Kiwi companies. New Zealand has got some amazing start-ups which now play on the global stage.”

Some advice for budding entrepreneurs

Frank has some insights for anyone looking to begin a start-up in New Zealand:

1) Do your research on your business idea, make sure the odds are in your favour before you start your new business.

2) Do a risk analysis so you don’t have any nasty surprises.

3) Budget well, make sure you have enough money, most start-ups fail on lack of funding.

4) Be different. Don’t copy somebody else’s idea unless you can do it much better. Find a niche which you can own.

HYBRID E-bikes are designed and built in New Zealand to be versatile and flexible so they can handle a range of New Zealand riding conditions. Our e-bikes are fast and nimble on flat city streets but the lighter carbon fibre frame and powerful motor mean they are far superior to other similar e-bikes on hills where performance is critical.