Carlos Menem: The playboy president who upset applecarts from Wall Street to Wellington

The only Argentine President to have paid a state visit to New Zealand is Carlos Saúl Menem who died this year on Saint Valentine’s Day in Buenos Aires, aged 90.

New Zealand’s exemplary bi-lateral relationship with Argentina was kick-started by Menem’s 1998 state visit which, despite a higgledy-piggledy start, set the stage for what has become a close and successful co-operation in many multilateral forums.

Menem’s biggest claim to fame was crushing Argentina’s Weimar Republic-grade hyperinflation and fostering a strong economic recovery in the 1990s, although in the process he sowed the seeds for the world’s largest sovereign debt default (USD$155 billion), the aftermath of which still cripples Argentina’s economy to this day.

Menem’s political life was steeped in paradox as both a populist and right-winger, who had been elected as a centre-left candidate, then suddenly embraced neoliberalism and imposed what he described as “major surgery without anaesthetic” in a brutal version of what New Zealanders know as ‘Rogernomics’.

The child of Syrian immigrants who rose to the apogee of Argentina’s rarefied social strata, and an Arab who supported peace with Israel, he became an enemy of Syria and Iran (who later exacted revenge with two vicious bombings of Jewish targets in Buenos Aires).

Besides strengthening bilateral ties, Menem’s state visit to New Zealand in 1998 was also notable for how Menem’s impetuosity upset months of meticulous planning, sent the government scrambling, and from a protocol point of view, ended in high farce.

The official welcome and state dinner at Government House were all thrown into complete chaos when ‘Tango One’, Argentina’s Boeing 757 presidential jet inbound from Sydney, aborted its landing at Wellington Airport in an admittedly fierce southerly storm.

Menem refused a second landing attempt and ordered Tango One to Auckland and within a couple of hours was ensconced in the royal suite of the Carlton Hotel.

With no dignitaries or fanfare whatsoever to detain him, Menem walked to the Viaduct harbour accompanied by a plain clothed policeman and the renowned Pumas captain, Hugo Porta, who was travelling with the president in his capacity as Argentina’s Minister of Sport

Menem later said his Auckland walk was “a rare pleasure”, as no-one had a clue who he was and indeed it was Hugo Porta who was recognised by rugby fans in the Viaduct.

The fans invited Porta and Menem to a nearby sports bar for a beer where they fell-in with yet more rugby fans, all of whom were oblivious to the fact the gregarious ‘Carlos’ in their midst was the president of Argentina.

Those who did indeed know who Menem was were the 300 guests, including myself, assembled at Government House in Wellington 600 kilometres away, along with a military honour guard, Air Force band and Ngati Poneke Haka party, everyone dressed to the nines and reduced to twiddling their thumbs.

As it was too late to do otherwise, the formal vice-regal panoply of the state dinner proceeded with speeches of welcome from the Governor General, Prime Minister and Leader of the Opposition, all in the absence of the guest of honour.

The Argentine ambassador, with Menem connected on his cell phone, relayed the president’s apologies that he’d been forced by the “hurricane” in Wellington’s to divert to Auckland.

Menem declined to return to Wellington the next morning, so Prime Minister Jenny Shipley, senior Cabinet ministers, Governor General and a clutch of senior civil servants crammed into a RNZAF’s Boeing 727 transport jet and flew to Auckland for the delayed official welcome and bilateral meeting.

When they arrived in Auckland, the New Zealand officials found Menem, who had insisted on coming to the airport, waiting at the bottom of the airplane stairs to welcome them.

In the largest upset of diplomatic protocol in New Zealand history, a foreign head of state welcomed New Zealand’s leaders on their own soil, an event so remarkably topsy-turvy it garnered global headlines.

I had another taste of Menem’s unpredictability when I was invited by a friend of Menem’s to join the president in his box at Buenos Aires’ fabled Art Nouveau opera house (the ‘Teatro Colon’) for a performance by the acclaimed Argentine singer, Mercedes Sosa.

Arriving at the appointed hour, we were informed Menem had unexpected “state business” and neither he nor any of his entourage would be attending, although we were still welcome to use the presidential box; the only caveat being we were denied the use of the gilded & tasseled throne-like chair, which was the exclusive preserve of president.

Paparazzi photographs splashed across the press the next day revealed Menem’s ‘state business” as having been a tête-à-tête dinner with the reigning Miss Universe (a Chilean beauty he later married). 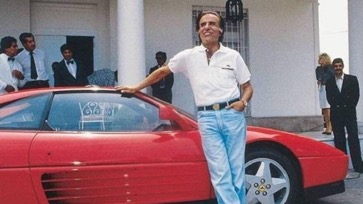