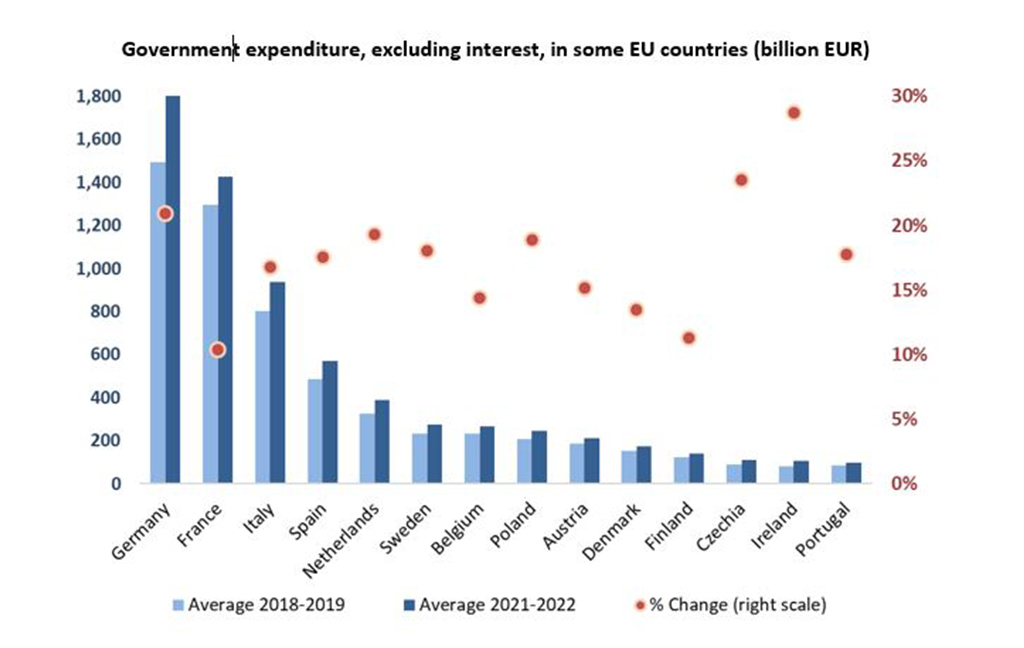 Big in the EU: historic investment plan to relaunch the economy

We’ve learned to take economic forecast with a grain of salt. Especially when an exogenous phenomenon like a pandemic displays its effects with hard-to-predict geographic and time patterns.

After the historic drop of GDP in 2020 (-6.1% in EU27, twice as much as New Zealand) the European Union (EU) broke new ground by agreeing a large recovery spending package named ‘Next Generation EU’.

This new EU programme, financed by common borrowing, is worth 750 billion euro and goes on top of the EU’s normal long term budget, which weighs in at 1.074 billion euro in the seven years from 2021 to 2027.

The largest component of Next Generation EU is named ‘Recovery and Resilience Facility’ (RFF) and it will provide the 27 member States with 672.5 billion: 312.5 in grants and 360 in loans. The RRF will help members States to address the impact of the Covid-19 pandemic, to foster the green and digital transitions and to build resilient and inclusive societies.

The portion that each State will get, and the proportion between grants and loans, have been calculated according to population, GDP per capita, unemployment rates and the loss in real GDP over the 2020-2021 period.

The RFF is a temporary programme and it shall be fully committed by the end of 2023 and disbursed by 2026.Thus, the 27 governments, along with their extraordinary fiscal stimulus, will benefit from an additional help made of EU grants and loans.

To benefit from the 672.5 billion euro allocated with the RFF, each national government is asked to submit a national recovery and resilience plan.

National plans are coherent packages of reforms and investment projects in the following areas:

1) The frontloading of future-proof clean technologies and acceleration of the development and use of renewables.

2) The improvement of energy efficiency of public and private buildings.

3) The promotion of future-proof clean technologies to accelerate the use of sustainable, accessible, and smart transport, charging and refuelling stations and extension of public transport.

4) The fast rollout of rapid broadband services to all regions and households, including fiber and 5G networks.

5) The digitalisation of public administration and services, including judicial and healthcare systems.

6) The increase in European industrial data cloud capacities and the development of the most powerful, cutting edge, and sustainable processors.

7) The adaption of education systems to support digital skills and educational and vocational training for all ages.

At least 37% of each plan’s allocation has to support the green transition and all measures included in member states’ plans should respect the ‘do no significant harm’ principle, to protect the EU’s environmental goals.

The 27 national plans will be assessed by the Commission and approved by the Council; in the meantime, all countries shall ratify the bill expanding the EU’s resources to finance the RRF.

National plans submitted so far indicate that some member states will go for the grants offered by the RRF but won’t tap its loans; some countries have borrowing costs lower than the RRF loans, or prefer to spend avoiding the strings attached to the RRF.

However, even if the effective RRF will be smaller than its potential 672.5 billion, the magnitude of overall fiscal stimulus is quite impressive. EU-27 governments’ expenditure, excluding interest, will increase by 17% (comparison between Average 2018-2019 and Average 2021-2022); this figure ranges from 10% in France to 29% in Ireland (see graph).

What’s in for kiwi business?

The core part of the RRF will be devoted to green and digital objectives. These are sectors where New Zealand’s businesses have a strong track record. European countries are in principle open and committed to establishing a level playing field between EU and non-EU companies participating in tender procedures.

For this reason, the EU is part of the Government Procurement Agreement (GPA) – along with other 19 WTO members (New Zealand included) – with the aim to open their markets for certain types of purchases of public entities above specific values. The EU is also committed to opening its public procurement markets through free-trade agreements (FTA) outside the WTO. New Zealand and the EU are still negotiating their FTA and the public report of the 10th round confirms the intention of both parties to improve the respective procurement coverage commitments under the GPA.